When the relative humidity of the air at a given temperature passes beyond its saturation point it can no longer exist as water vapour. At that point it reaches the dew point and condenses into liquid water.

What’s The Connection to Condensation?

In Canada, the temperature fluctuates with the seasons. In winter, obviously, the outside temperature is cold. Equally obvious is that fact that we keep the interior of our homes and buildings warm and comfortable, creating a significant difference between the colder outside air and the warmer inside air.

Inside our homes, we generate a significant amount of humidity. Everything from cooking to bathing to watering the plants releases water vapour into the air and, because the air inside our homes is much warmer, the relative humidity is higher than the air outside, just on the other side of the exterior door or skylight. 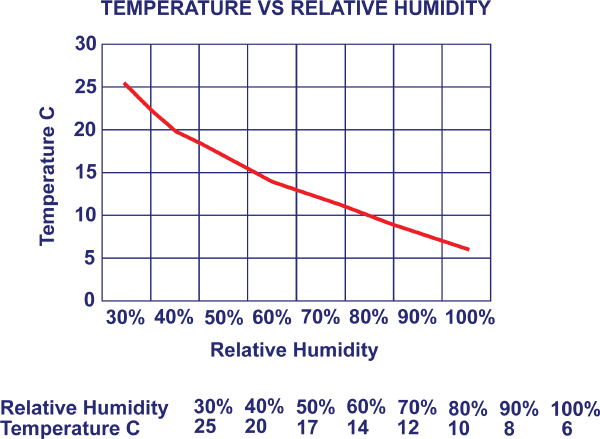 What happens is that, as the warmer, more humid air comes in contact with the cooler surfaces, the sudden drop in temperature has the immediate effect of increasing the relative humidity of that narrow band of air close to the glazed unit. As the relative humidity rises, it reaches 100% and since the air can hold no more moisture, the water vapour changes to liquid, condensing into droplets of water on the cooler surface.

Most glazed surfaces will have some condensation on the bottom edge of glass sometime during the winter. High performance exterior doors, patio doors and skylights, with energy efficient glazing and warm edge spacers, will reduce the amount and frequency of occurrence by raising the inside glass temperature. A double-glazed low-e, argon filled, unit with a warm edge spacer could be 5 oC warmer than a standard unit.

The chart shows humidity levels that will likely produce unwanted condensation for standard glazed units and for high performance ones at various temperatures. 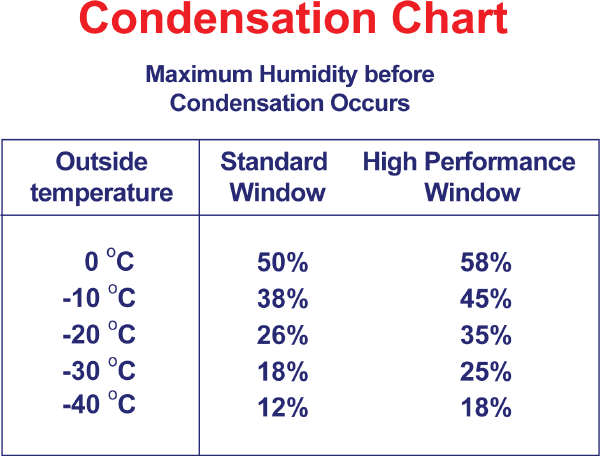 Previous: Where Does It Come From?
Next: Controlling Condensation