Glazing is the generic term for the transparent, or sometimes translucent, material in a window or a door. Quite simply, it is the part that you can see through and that lets light pass through. While the most common glazing material used in today’s windows is glass, other materials such as hard plastic, plastic films and acrylic are also used.

The windows of today usually consist of a separately manufactured glazed unit which is sealed to prevent air and moisture from entering the air space. The seal also keeps dirt from getting on the interior surfaces of the glazing. If the seal is broken, the only cure is to replace the sealed glazed unit.

Some units are made with a single seal and others with a dual seal.  The sealant has to perform two functions.  One is to hold the glass together, and the second is the stop the migration of moisture into the unit and gas out of the unit. 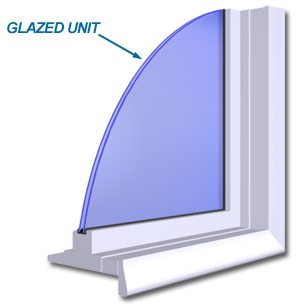 Will That be Single, Double or Triple?

Glass itself is not a good insulator, but the air between the panes of glass does improve thermal resistance. The width of the air space also influences the insulation value of the window. The optimum air space in a sealed unit is 1/2” (13mm). Efficiency is improved with the addition of argon gas. Where smaller spaces are required Krypton gas is used. Typically, the R-values, or the resistance to heat flow at the centre of glass of the different clear glazing with air spaces are as follows:

All windows in Canada should be at least double glazed, (with low-e and gas filled) to achieve the level of energy efficiency and performance required to be effective in our changing climate.